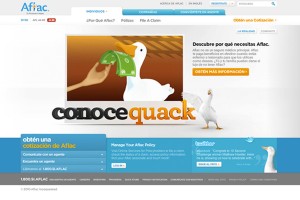 Last month, Aflac launched a Spanish language website targeting Spanish dominant Latinos in the United States. The provider of guaranteed-renewable insurance seeks to offer “the same quality of interaction and experience, as we offer on our English site.” The development of the English site began in summer 2009 and was launched January 2010; the development of the Spanish language site began the last quarter of 2009. The interactive Spanish-language pages were designed “to inform Hispanic consumers in a culturally relevant way about how Aflac is different from other types of insurance.”

A team with members from New Media, IT, and Emerging Markets departments worked closely with staff from Conexión and FirstBorn, the company’s public relations and digital agencies respectively. The Spanish language website invites visitors to discover why they should purchase its insurance services, and link for visitors to find and communicate with an agent. A section titled Nuestras Historias (Our Stories) features videos of five women and three men agents in California, Florida, New York and Texas who discuss their work with the company.

In addition to press releases the company is planning to promote the new Spanish language website, aflacenespanol.com, to its primary audiences: consumers, business owners and bilingual recruits for the remainder of this year. According to a company representative, the online strategies they have in mind differ by target group and include SEM (search engine marketing), banner ads, and email marketing.

When asked by email how many visitors they anticipate on the Spanish language website a company representative responded: “We expect the site to be well received by Spanish speakers and are putting significant efforts to promote it. At this point, we are building traction and are looking at this as a long term investment in the Hispanic community. It is a bit early to speculate on specific traffic goals.”

Aflac is short for American Family Life Assurance Company. Established by brothers John, Paul and Bill Amos in 1955, Aflac is a Fortune 500 company incorporated is an international holding company based in Columbus, Georgia. The company, the insurer of 50 million people worldwide according to its website, has a presence in all 50 United States and U.S. Territories as well as more than 75,300 licensed agents; it had assets at the end of 2009 of more than $84 billion and annual revenues of more than $18 billion.