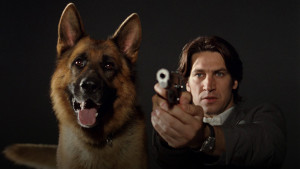 The first season of Inspector Rex (Kommissar Rex) in German with English subtitles is available on Mhz Choice, a subscription streaming service with mostly European programming. After Rex, a police dog, loses his partner in the line of duty he becomes despondent, refusing to eat or drink anything. Seeing the dog’s situation a recently divorced cop adopts him.

An all male cast, staring Tobias Moretti as Richard Moser and Karl Markovics as Ernst Stockinger as well as Gerhard Zemann and Wolf Bachofner, solve crimes in and around Vienna in the 1994 series. Each episode is 45 minutes long. According to IMDB.com the series ended in 2004. The website lists Reginald von Ravenhorst, born in 1991 in Bavaria, Germany and died in 2003 in Germany, as Rex.