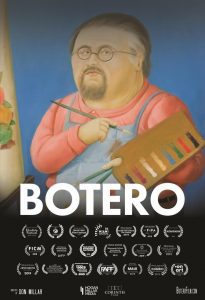 An 84-minute long film showcasing the life and art of Fernando Botero, known internationally for his paintings and sculptures, was released by Corinth Films this month in several California, Pennsylvania, Minnesota, Louisiana and Colorado theaters. It has appeared in 13 film festivals. A trailer was not available.

It features interviews with the author, his adult children and other relatives as well as art curators, academics and historians. It is in Spanish, English, Italian, and French with English subtitles. The 2018 film was directed by Don Millar, written by Millar and Hart Snider. According to promotional materials, it includes original footage shot in 10 cities across China, Europe, New York and Colombia, with decades of family photos and archival video. His daughter, Lina Botero Zea, is listed as chief creative consultant and executive producer. This may account for the film’s access to the artist and his family as well as family homes and the artist’s studio in Monaco.

Millar is a Canadian film and television director based in Vancouver. His previous directorial credits include the climate change documentary Oil Slick, Full Force about rugby star Harry Jones, and the scripted narrative Off the Clock. Corinth Films has been distributing foreign and independent arthouse cinema in the United States and Canada since 1977.