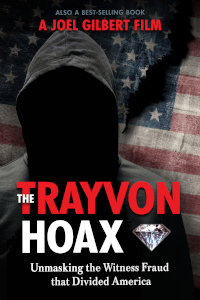 Los Angeles based filmmaker Joel Gilbert set out to produce a documentary about the rise of Andrew Gillum, a past Florida gubernatorial candidate. He ended up writing a book and making a film about the death of Trayvon Martin and the trial of George Zimmerman in Sanford, Florida. The world premiere debut of The Trayvon Hoax: Unmasking the Witness Fraud that Divided America, a two-hour film, was at The National Press Club in Washington DC September 16, 2019. Scroll down to watch a video clip of the film.

When asked by email what prompted him to search this topic, write a book and make a film the director said, “I had followed the 2012 shooting death of seventeen-year-old Trayvon Martin and the subsequent trial of George Zimmerman from afar and, like many others, I had grave concerns about the lynch mob mentality that drove the case. Only after I started researching the project did I realize I had stumbled into the most spectacular case of identity fraud in modern American judicial history. The fraud resulted in the seminal race hoax of the Obama years. I call it ‘The Trayvon Hoax.’ It is appalling that six years after the Zimmerman trial so much information was left for me, an independent filmmaker, to discover. If the media had wanted to find the truth, it was there for the plucking. I was able to uncover it simply by reading publicly available information from the legal proceedings and following up on what I read. How is it possible no one in the media chose to do what I did? The answer is simple. The media did not want to know. The truth would not have advanced their fear-fueled racial agenda.

The Zimmerman trial literally divided America. Prior to the trial in 2012, both blacks and whites rated race relations as positive. This has been negative ever since. It lead directly to the ‘Ferguson Effect,’ a crime disaster for black neighborhoods with homicides up 33 percent. Also, the modern era of fake news and race hoaxes started with this case. Nothing has been more damaging to the United States than this trial and no one has suffered more from this ongoing hoax than the black youth of America.”

It took about 11 months to complete the film and book project, the author said. He dedicated the first five months to the investigation and filming. The next six months were for film editing and writing the 272-page book. He declined to disclose the budget or the source of funding for his project, saying, “We are a private independent film production company and we don’t disclose our budgets related to any project. However, there was no third party funding or donations for this film.”

“This Trayvon Martin shooting and Zimmerman case is still talked about and on everyone’s mind,” the filmmaker said when asked why he thinks the topic is relevant today, years after the trial took place. “Its why Black Lives Matter was formed. Presidential candidate Kamala Harris recently tweeted that Trayvon Martin started a movement. Well, that movement led to massive racial division and harm in America, all because of a fake witness. All the fake news and race hoaxes that continue to this day started with the Zimmerman trial, it was ground zero. Also, Sybrina Fulton, Trayvon Martin’s mother, is running for Miami-Dade Commissioner. The film provides evidence that Ms. Fulton knew about the fake witness in the case, but allowed it to go forward anyway. She did not alert the media or the judge even though she knew Rachel Jeantel was not Diamond Eugene as she claimed to be. Ms. Fulton was just endorsed by Hillary Clinton on Twitter who asked her 25 million followers to contribute to her campaign. Corey Booker endorsed her as well. I have no doubt that the Democrats are planning to bring Ms. Fulton to the Democrat convention once again in 2020 to help push their race based narratives of ‘black-men-are-targeted-by-racist-whites and cops’ to try to secure 95 percent of the black vote.”

When asked if he compensated Zimmerman (or anyone else) in any way for the on camera interview he replied, “As is customary for interviews with public figures who are featured in documentaries in extended interviews, Zimmerman was paid an appearance fee for his time. Zimmerman did not testify in his own trial, so The Trayvon Hoax: Unmasking the Witness Fraud that Divided America provides his account for the first time.” 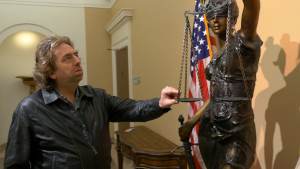 Joel Gilbert in a scene from the film

To the question “Did you reach out to the teenager’s family, Zimmerman’s attorney, the prosecutor, witnesses such as Martin’s girlfriend who testified or anyone involved with the case (other than Zimmerman’s on camera interviews) to ask for their comments on your findings?” he replied, “I reached out to Zimmerman’s attorneys early on and got some help with background questions mostly. Mark O’Mara initially expressed skepticism that Rachel Jeantel was a fraud. “She was such a terrible witness,” he told me rhetorically, “why would anyone use her as a substitute?” I explained to O’Mara that those who knew the depth of the evidence exonerating George, his broken nose, his recorded screams for help, Johnathan Good’s testimony, never expected to get a conviction. Nothing any fake witness could say could overcome the hard evidence, I told him. But then again conviction was never the point; an arrest was what mattered. For Crump, an arrest opened the door to a civil suit. For the State of Florida, an arrest kept the mob at bay. For Barack Obama’s Justice Department, an arrest meant getting out the black vote for Obama in 2012 in Florida and hopefully nationwide. For Al Sharpton and his crowd of Leftists, an arrest and trial advanced their racially charged agenda.”

The film and book are available online at Amazon.com and other websites that sell DVDs, books and eBooks. The film is available as a DVD and for live streaming on demand on Vimeo.com.

“I hope that by exposing the truth about this major legal case that divided America based on a fraudulent witness, that it might result ultimately in national healing,” he said when asked what he hoped to accomplish from the book and film. “America got played by an epic race hoax that divided us for no reason. Americans are all brothers. Black and white, we are all brothers. My hope is to show how politicians and the media used Trayvon Martin’s tragic death to tear us apart, when our true aspirations have always been to come together as one nation.”

According to his website biography Gilbert is president of Highway 61 Entertainment, a political commentator and foreign policy analyst. Other films listed to his credit include Dreams from My Real Father (2012), There’s No Place Like Utopia (2014), Trump The Art of the Insult (2018), Farewell Israel (2008) and Atomic Jihad (2010).