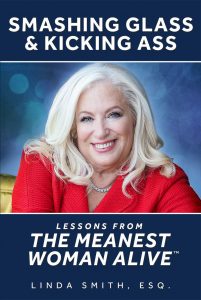 According to her bio, Linda Jane Smith has found much success as a lawyer; and she has defended Exxon in an Alaska environmental lawsuit among other high profile cases. She believes she knows the path to the top and wants to share it with women. She dedicated time during one year to gathering her thoughts in Smashing Glass & Kicking Ass: Lessons from the Meanest Woman Alive ($19.97), a 245-page softcover book published this year.

It seems she believes those women who have not risen through the ranks the way she has are attempting to advance the wrong way because they are competing according to the rules of the male playbook; if they try harder, stop underestimating themselves and apologizing and start playing by a new set of rules they might become successful like her.

When asked by email via her publicist what inspired her to write the book she replied, “I am outraged that talented, fantastic women are still not making it to the top.Despite decades of superficial change in the ranks of business, today’s women are stalled in their quest to advance their careers. Across every level of work, in every industry, women still struggle to earn the same level of pay, to receive equal access to opportunity and promotion, and to do the work they were hired to do without fear of harassment or the discrimination of pervasive gender bias.”

Regarding the target audience for her book she said, “Despite graduating from college and professional schools and entering the workforce in equal numbers with men, females fail to make the same progress in their jobs as their male counterparts do, and that phenomenon repeats itself throughout the leadership pipeline. The number of women shrinks by about half at the middle-management level and dwindles to a fragment when it comes to promotion to the C-suite.

I thought my target audience would be college or grad school women in their mid-20s. ‘Here’s everything you need to know to succeed as a woman in business.’ But women tell me it takes a few years before they feel the brunt of gender discrimination. These women, in their late- twenties, early thirties and older, are looking to take their careers to the next level and are stuck, getting pushed out, settling for positions for which they are overqualified, or burning out along the way.”

When asked what makes her the Meanest Woman Alive she replied, “I am one of the top women litigators in the United States. Corporate Board Member Magazine did a profile on me in 2001 and entitled it ‘The Meanest Woman Alive.’ Clients love it. When I’m representing them on gigantic cases with billions of dollars and their company are at stake, they love to say they are represented by the Meanest Woman Alive and my law firm.
I view myself as a gladiator for my client—I protect them and defend them. And I am professional and fun to deal with. It’s only when they are attacked or someone lies or misrepresents the facts or the law, that I become mean. If anyone messes with my clients and doesn’t have integrity, I will go after them hammer and tong.”

How will she measure the success of her book? “Based on the number of women I inspire to unleash their unique feminine advantages. My Facebook website has a half million Followers whose comments uplift me as do women’s responses to the 11 tv shows, 25 plus podcast and innumerable articles and blogs I have written,” she said.