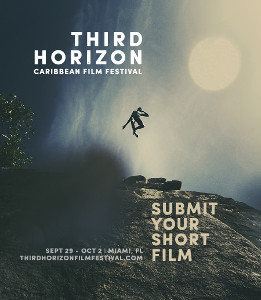 This fall Miami, Florida movie lovers will have Caribbean themed film options during the first Third Horizon Film Festival. Thanks to funding from The Miami Foundation and the Knight Foundation (the festival was winner of the 2014 Knight Arts Challenge) between September 29 and October 2, 2016 the festival will showcase the work of Caribbean filmmakers at O Cinema, Wynwood, 90 NW 29 street, Miami, Florida 33127. Plans are in place to highlight eight full length features and a few short films.

“The Third Horizon Caribbean Film Festival aims to celebrate and empower filmmakers from the Caribbean and its diaspora,” said Donnamarie Baptiste, a consultant to the festival, by email. “With the democratization of filmmaking, the barriers to making a film have become less prohibitive. The festival aims to seize this moment to connect promising Caribbean filmmakers with the resources and opportunities they need to take their films to the world.”

“The name Third Horizon comes from a feeling that popular entertainment is not diverse enough, and that every child should see themselves reflected in what is considered global entertainment,” said Fitzroy Jeffers, who is also executive director, from Barbados via a spokesperson, when asked about the meaning of the festival name. “Growing up I felt I was less than because of the color of my skin, and believed I was from the ‘Third World’-although we know that the ‘first world’ is powered by the blood, sweat and tears from the ‘third world.’ So Third Horizon is that moment and space where the stories, sounds and visions of the so called ‘third world’ find the support, audience, funding and distribution needed to give us equity.”