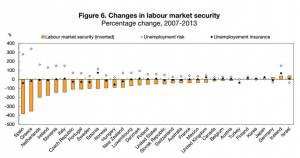 How is your job satisfaction? If your answer is average, it is not surprising. If the quality of your employment declined in the past 10 years you are not alone. What makes a good job and how do individual countries measure in that category? Seeking to answer these questions the Organisation for Economic Co-operation and Development (OECD) examined job quality from the following perspectives: Earnings quality, job market security and work environment quality.

For earnings the organization’s researchers looked at earnings and their distribution across the workforce. For job market security they examined the risk of unemployment and its expected duration. When considering the quality of the working environment they looked at the incidence of demands and resources and the combined potetntial of high demands and low resources that result in job strain.

The best performing countries are Australia, Austria, Denmark, Finland, Germany, Luxembourg, Norway, and Switzerland. They are followed by Belgium, Canada, Czech Republic, France, Ireland, Israel, Japan, Korea, Mexico, Netherlands, New Zealand, Slovenia, Sweden, United Kingdom, and United States display with average performance. That means than when examining the three job quality measures, they countries display no more than one outcome in the top-10 or the bottom-10 of the ranking. At the bottom of the list are Estonia, Greece, Hungary, Italy, Poland, Portugal, Slovak Republic, Spain and Turkey.

The OECD data also reveal significant differences across groups of workers. Young and unskilled workers generally have the worst performance in terms of employment and have lower earnings and considerably higher labour market insecurity and higher job strain than other segments. Women’s employment rates are much higher than men’s while at they are paid far less than their male counterparts. On the up side, they are less likely than men to suffer from job strain.

The mission of the OECD is to promote policies that will improve the economic and social well-being of people around the world. The organization, based in Paris, France, was established in 1961. It has 34 member countries, 2,500 staff and a budget of 363 million euros.