Maryland home to some of most ethnically diverse cities in country 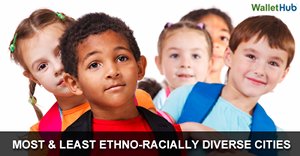 It is no secret that the face of America is changing. Immigration, native births and mixed ethnicity marriages may be among the factors leading to a growing racial and cultural blending across the country.

Since 2011, more than half of children born in the United States have been part of ethnic or racial minorities; and by 2020, the total minority population may grow to 40.7 percent from 30.9 percent in 2000, according to the U.S. Census Bureau.

To get a glimpse of the situation today, Richie Bernardo, personal finance writer, WalletHub, and the folks at his personal finance website researched the topic and consulted 12 academics (six men and six women). With their help he identified what could be the “most ethno-racially and linguistically diverse landscapes.” He compared 313 of the most populated cities nationwide with three criteria in mind: diversity by racial and ethnicity, language and United States region of birth and produced 2015’s Most & Least Ethno-Racially Diverse Cities, a short report.