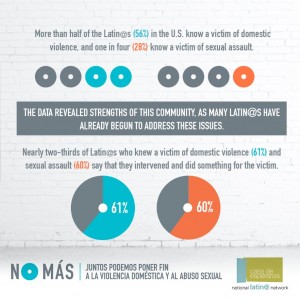 According to No More 12.7 million people are physically abused, raped or stalked in one year. Believing there is a strong and compelling need to better understand how these issues impact Latinos, and that Casa de Esperanza is the leading Latino organization in the country dealing with the issues of domestic violence and sexual assault, No More and Casa de Esperanza National Latino Network approached the Avon Foundation for Women to fund a survey on the subject.

The survey results have led the organizations to conclude Latino respondents were addressing domestic violence and sexual assault issues since 61 percent of them who said they knew a victim of either also said they intervened and did something for the victim. Lake Research Partners designed and administered a telephone survey of 800 adult Latinos nationwide conducted between January 27 and February 10, 2015. Among those surveyed 30 percent were interviewed in Spanish. The margin of error for the total sample is +/- 3.5 percent.

National Latino Network for Healthy Families and Communities is a project of Casa de Esperanza, a national institute on domestic violence in Latino communities. Casa de Esperanza has worked for 30 years to mobilize Latino communy to end domestic violence. According to the No More website, No More it is a collaboration of many groups working through a fiscal sponsor, the Joyful Heart Foundation, a registered 501c3. The organization’s goald is to raise awareness nationally and bring people, organizations and advocates together “to help gradually shift perceptions, normalize conversations and engage bystanders to take action to prevent and ultimately end domestic violence and sexual assault.”

The Avon Foundation for Women is one of the world’s largest corporate-affiliated philanthropy organizations “focused on issues that matter most to women.”  Through 2014, Avon global philanthropy, led by the Avon Foundation, has contributed nearly $1 billion in over 50 countries. Today, Avon philanthropy focuses on funding breast cancer research and advancing access to quality care through the Avon Breast Cancer Crusade, and efforts to reduce domestic and gender violence through its Speak Out Against Domestic Violence program.