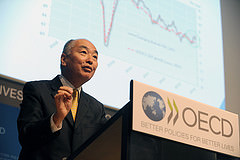 Most major advanced and emerging economies are experiencing a moderate if uneven expansion across regions; and growth is weak in the euro area, which may suffer prolonged stagnation unless something happens to boost demand, according to the Organisation for Economic Co-operation and Development’s (OECD) most recent Interim Economic Assessment.

In the United States, the United Kingdom and Canada, the researchers believe growth will be cause unemployment to drop. In Japan, where unemployment is already low, the economy may grow broadly. They believe China will to continue experiencing high yet more sustainable growth rates while India and Brazil rebound from the recession.

“The global economy is expanding unevenly, and at only a moderate rate,” said Rintaro Tamaki, deputy secretary general and acting chief economist, OECD, at the Interim Economic Assessment in Paris, France, according to the OECD website. “Trade growth therefore remains sluggish and labour market conditions in the main advanced economies are improving only gradually, with far too many people still unable to find good jobs worldwide. The continued failure to generate strong, balanced and inclusive growth underlines the urgency of undertaking ambitious reforms.” 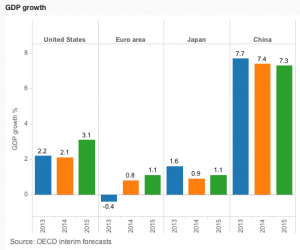