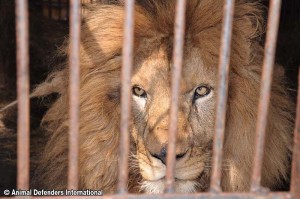 Animal Defenders International (ADI), a 501(c)(3) nonprofit organization registered in Delaware and California, with offices in Los Angeles, London and Bogota, campaigns on behalf of animals used in entertainment, and other industries. Recently, the organization relocated circus animals, including 29 lions, from circuses in Bolivia after that country’s legislature passed a new law banning animals in traveling circuses, and asked ADI for assistance relocating the lions abroad.

According to ADI, Bolivia’s ban on animals in traveling circuses was the result of the organization’s undercover investigation that exposed behind the scenes cruelty, and its public education campaign. While one circus surrendered the lions voluntarily eight others weren’t ready to comply initially. ADI, with the support of government representatives, pressured the circuses into turning the remaining lions into their custody.
During Operation Lion Ark in 2011, in addition to the lion seizures, the team assisted in moving six monkeys, a coati mundi, a deer and a horse. The native wild animals (monkeys, coati mundi and deer) were returned to protected wild areas.

“What I didn’t realize was that it was going to be an extraordinary story about the human spirit and what the human spirit can do when people come together,” said Jorja Fox, an actress known for her role as Sara Sidle in television show CSI who was an associate producer of Lion Ark and also appears in the film, in a press release. 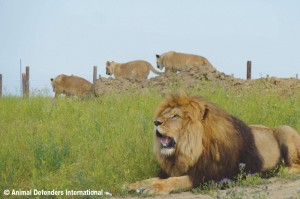 There were about twenty people in the ADI team that saw to the rescue and relocation of the circus animals. They were from Britain, Bolivia, Colombia, Peru and the United States. The organization filmed the activities that took place during the seven month period in which 25 of the 29 lions were seized from the circuses, rehabilitated, flown to their new home in Colorado and released in their new habitat. The result was Lion Ark, a moving film that covers the process from the ADI perspective and features interviews with investigators, campaigners, government officials and members of congress in Bolivia.

The film was separate from the relocation project and took about two and half years to complete. Scroll down to watch short video clip of Lion Ark film.

The relocation of the animals, ground and air transport, crates and the building of the animal enclosures and lion houses at sanctuaries the United States cost over a million dollars. The film budget itself was separately funded, and was about half a million dollars. Bob Barker, a well known celebrity in the United States and an animal rights advocate, funded Operation Lion Ark.

In order to provide the lion prides an experience as close as possible to what they might have had in a natural environment, they were placed in four natural enclosures (among the largest available) occupying 80 acres at The Wild Animal Sanctuary (TWAS) near Denver, Colorado.

“People sometimes ask, why bother about animals when there’s so much human suffering? But it is not a choice of one or the other. When we protect the weakest or the most vulnerable, whether it is animals or people, we all gain. That’s how we shape our world…understanding our connection with other species, and our place on this planet, is the next step in human evolution,” said Jan Creamer, president and founder, Animal Defenders International, in the film. 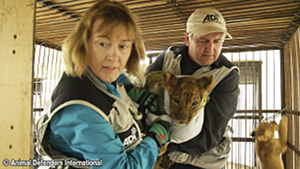 Jan Creamer and Tim Phillips of ADI and a lion cub

Since their relocation, the Lion Ark lions have been living in family prides at the Colorado facility where ADI plans to continue to fund their care for the rest of their lives, according to ADI. The new lion home was outfitted with fencing and basic safety measures as well as enrichment facilities, wooden constructions to climb and play on, hill-like mounds and underground dens, to provide a diverse and exciting space to keep the lions busy and stimulated.

Lion Ark, the film, was nominated for this year’s Image Awards of the National Association for the Advancement of Colored People (NAACP) in the Outstanding International Motion Picture category. The other five nominees in the that category are: War Witch; Call Me Kuchu; La Playa D.C.; and High Tech, Low Life.

“We are honored to have been nominated for this award. Lion Ark is a film about respect for people and animals so we are really pleased to receive this acknowledgement,” said Tim Phillips, director, Lion Ark, in a press release. “In this film, you see the worst of humanity, but also humanity at its best. It is an empowering film that shows that people can make a difference. Lion Ark shows how animal protection is a vital part of the fabric of social justice, where human society draws a line as to what is, and is not, acceptable.”

The producers of Lion Ark hope to have the movie on general release in 2014. Once Lion Ark is purchased by movie distributors, it should become available at movie theaters, and via TV, DVD and VOD, a representative explained by email. As of November 10, 2013, Lion Ark had appeared in eight major film festivals in United States and United Kingdom.