Heineken owned beer brand Indio marketers created a billboard campaign to reach target consumers, bicultural Hispanic millennials 21 years of age and older “who consider themselves to be original individuals and place an importance on expressing themselves through everything they do, whether it’s art or music.” They invited artists in several states to submit art around an Indio bottle theme to compete. At the conclusion, a few winners had their artwork displayed on billboards as part of the campaign.

The Indio billboard by Saul

Company representatives promoted the Indio Gallery campaign across digital media, with heavy emphasis on Facebook. The brand’s Facebook page (Facebook.com/IndioBeer) was the primary gate for consumers to submit their Indio themed artwork. Each entry from among the hundreds of submissions was judged on creativity, originality, composition and inclusion of Indio brand imagery such as the Indio logo or colors.

The Indio billboard by Benjy

The Indio billboard by Ignacio

Each artist is credited for his work on the billboards, which feature their name and hometown, as well as the brand’s tagline, beer bottle and Facebook address.

The billboards were on display for four weeks in the Chicago, California, and Texas markets in October 2013. Grand Prize winner Arturo Rios received a $5,000 cash prize. 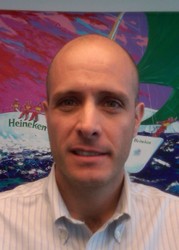 “Public relations efforts generated coverage across media consumed by our target, while our panel of judges promoted the contest amongst their networks via social media and flyers,” said Gustavo Guerra, brand director, Tecate, Indio and Bohemia brands, by email, in response to questions about promotion and coverage. “We looked at the number of entries we received, as well as engagement on our Facebook page and paid media.”

The judges, who were compensated for their time, were Gil Cerezo (the lead singer of Mexican band Kinky), Diana Garcia (a Mexican illustrator and actress), Federico Archuleta (an Austin street artist), Juan Angel Chavez (a Chicago artist), the president of the National Museum of Mexican Art in Chicago, and the Indio brand team. The Indio Gallery contest was open to residents of California, Texas and Illinois, the states in which the company launched Indio in 2012. Indio is also distributed in Phoenix and Las Vegas. The resulting billboards were placed across key cities in those markets in October 2013.

Indio is imported from Mexico. A company representative declined to disclose the number of bottles sold in the United States per year or the percent of the Hispanic market segment among fans of the beer brand. Launched in 1893 under its flagship brand, Cuauhtémoc beer, the label featured an Aztec emperor. Consumers nicknamed it the “beer of the Indian.” This led to the current name, which is Spanish for Indian, in 1905.