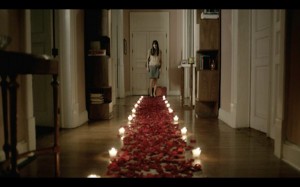 Beer maker Tecate wants to win over Spanish speaking and bilingual men 21 years of age and older in the United States and Mexico with Es Fácil Ser Hombre, its most recent Spanish language ad campaign. The company’s three 30-second TV spots, three 60-second radio spot and out-of-home ads will run across what its marketing executives consider its key Spanish language markets in the United States and Mexico.

The TV spots, filmed and produced in Mexico City, were completed in late 2012 and the radio spots in early 2013 by a team led by Felix Palau, vice president of Marketing for Tecate. 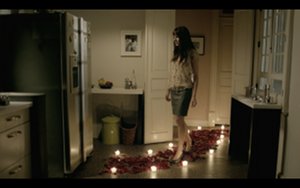 “It’s important for us to ensure that our brand communication efforts in the U.S. and in Mexico are aligned. However, because we understand that there are nuances between Hispanic men living in both countries, we tested our Mexico-created spots in our key U.S. markets. We’re very happy with the positive feedback we received from consumers in these focus groups, and are certain that the inherent wit and humor in the spots is relevant to all Hispanic men con carácter,” said Palau by email.

The company launched the TV and radio spots April 22 and the OOH began rolling out April 29. The campaign is expected to run through the summer and into early fall. Company representatives declined to disclose the campaign budget or the number of staff involved in the project.

The campaign was created by Olabuenaga Chemistri, Tecate’s Mexico City advertising agency of record. The staff designed the campaign around “real-life situations” they hope men relate to, showcasing “how they use their ingenuity, wit and humor to resolve these without losing their carácter.”

In the first 30 second spot titled Boda (Wedding), the bride throws the bouquet and is confused when it bounces back. After a few tries the camera turns to reveal a man jumping in to throw the flowers back to the bride. The spot ends with the narrator saying “A man prefers an uncomplicated life.”

Llaves (Keys), the second spot in the campaign, shows a man coming home late from a night out. When he tries to open the door he realizes he does not have his keys and uses his cell phone to call for help. A group of mariachis show up to serenade his wife, which leads to her opening the door and letting him in without knowing he had forgotten his keys and without reprimanding him for his late arrival. The narrator closes the spot with “A man knows there is always another way in.”

The third and last spot, Pétalos (Petals), shows a woman coming home and finding a path of rose petals and candles that lead her down the hall to the refrigerator. She hears her husband calling from another room: “Honey, since you’re already in the kitchen, could you please bring me a Tecate?” The narrator finishes by saying: “A man knows how to get what he wants.”

The Spanish-language radio and out-of-home were designed to have the same tone as the TV ads. The first of the three 60 second radio spots, Pregunta (Question), opens with a woman pressing her husband to ask for directions when they find themselves lost while driving. She’s surprised when the man agrees, and even more so when her husband pulls over to inquire about the score of the soccer game. The spot ends with the narrator saying, “A man only asks questions when it’s necessary.” 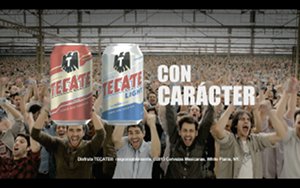 In the second spot, Teléfono (Telephone), a man tells his male friend he needs to leave the bar to go home, and is chastised for wanting to leave just to please his wife. The main character calls home to check in, and upon hearing his wife’s angry response he pretends to be a pizza delivery guy, hangs up the phone and decides to stay at the bar. The narrator finishes the spot saying: “A man knows how to test the waters.”

The third radio spot, Película (Movie), begins with a man asking his girlfriend if she’d like to stay in for a movie night at home. When the woman states she loves the idea, the man says: “That’s great! I do want to go out with my friends so I’ll see you later!” A narrator closes the spot with, “A man takes advantage of any oversight.”

The first OOH creative features a puppy with the word anzuelo (hook), while the second one shows a pair of sunglasses at the beach, reflecting a woman and the word escáner (scanner) written underneath. The ad creators tied radio and OOH to the campaign by using the brand tag line Es Fácil Ser Hombre. Con Carácter.

“For the past few years, we have been building upon Tecate’s values, which include carácter, masculinity, and ingenuity, and are excited to see those traits exemplified in this campaign,” said Palau. “Since the ads are running in Mexico and the U.S. to ensure consumers on both sides of the border are being exposed to the same messaging, we had to ensure the scenarios presented were relatable to all Hispanic men, not just Mexicans. We are proud of the end result and hope consumers enjoy the light-hearted nature of this campaign.”

Tecate is a brand of Heineken, USA Inc., a leading upscale beer importer and a subsidiary of Heineken International BV. In addition to Tecate, Heineken USA imports the Dos Equis Franchise, Sol, Indio, Carta Blanca and Bohemia brands from Mexico.