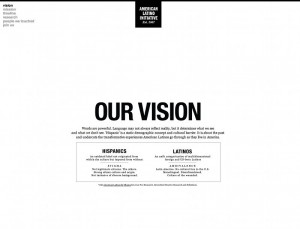 In 2008, a New York branding agency launched the American Latino Initiative and a related website. Convinced the word Hispanic is outdated, “a static demographic concept and cultural barrier. It is about the past and undercuts the transformative experiences American Latinos go through as they live in America,” the agency set out to change people’s minds about the way they see the growing market segment.

The goals of the initiative’s website are “removing the word Hispanic from the American lexicon; debunking myths and changing the industry narrative about American Latinos; and relentlessly advocating for American Latinos until these consumers are seen first and foremost as culturally diverse U.S. Citizens that value their Latino heritage.” Research for the initiative was funded by Greencard Creative and the clients listed on the website. Greencard Creative has worked with Smirnoff Ice, Pepsico/Ocean Spray, Heineken, Diageo, Petit Nectars, Gallo Winery, Johnson & Johnson, Bayer, Frito Lay, Campbell’s, and the Country of Ecuador.

The Greencard Initiative clients listed in the initiative website conducted research to identify ways their brands fit into their clients lives. Every year, as part of its ongoing research, Greencard Creative funds research for the initiative to supplement client funded research which represents 80 percent of the budget or about approximately $780,000. 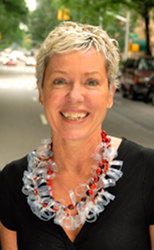 “It’s not about Hispanics anymore, it’s about American Latinos and the transition to their new identity,” said Tatiana Pagés, chief executive officer and Chief Creative Officer, Greencard Creative. “As a Latino entrepreneur, I feel it is my responsibility to challenge the stereotypes of Hispanics in the U.S. that have been overshadowing who they really are, and limiting where they can go as cultural citizens. Companies and brands have the opportunity to understand American Latinos as hybrid individuals beyond the Hispanic mindset, in order to create effective marketing and advertising campaigns to reach and connect with the fastest growing ethnic segment in our country.”

Based on 380 in home interviews, 72 individual interviews, and 77 group interviews in New York City, Los Angeles, Houston, Austin, Miami, and Chicago conducted with a mix of United States and foreign born Latinos between 2006 and 2012 Greencard Creative representatives concluded Hispanics are hybrid individuals, regardless of the length of time residing in the United States, with an identity that combines their original culture with American traits. They concluded these individuals seek experiences, “even when these experiences contradict the norms of Latino culture.”