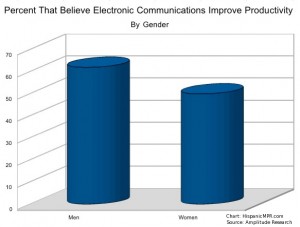 Percent by gender that believe productivity improves with electronic communications

Forty-three percent of respondents said they believed electronic communication improved workplace relationships while only eight percent felt it had a negative impact on relationships. Forty percent of workers said they had worked for an extended period with someone they had never met in person or spoken with on the phone.

Romance via electronic means was seen favorably by some of the respondents. Fourteen percent of survey takers said they flirted with a co-worker by email, texting or instant messaging and 10 percent said they had initiated a workplace romance communicating electronically. When communicating with family from work cell phone calls were the top choice with 36 percent of respondents saying they call family members by cell phone and 20 percent saying they text them.

While few respondents confessed to electronic workplace gossip 44 percent said they liked to gossip in person. When sharing gossip by electronic means 5 percent said they use email; 3 percent said they preferred texting and one percent favored instant messaging. The survey was conducted January 2013 by Amplitude Research on behalf of TrackVia, a Denver based do-it-yourself application builder for business people.