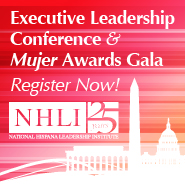 The National Hispana Leadership Institute’s 2012 Executive Leadership Training Conference and Mujer Awards brings together Latinas and NHLI’s accomplished alumnae from across the nation for two days of cutting-edge leadership and professional development, networking, educational and inspirational keynotes and workshops facilitated by top-level Latinas from across the country.

At the Mujer Awards Gala, celebrated since 1993, which will be held on Monday, December 10, NHLI will close the conference by paying tribute to the achievements and contributions of exceptional Latina leaders. Past honorees have included journalist and TV anchor Maria Elena Salinas, NCLR’s President Janet Murguia, and actresses Rosario Dawson and Eva Longoria.