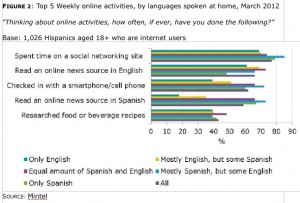 “Due to financial restraints, Hispanics are enjoying more in-home activities rather than spending their discretionary funds on out-of-home paid events,” said Adam Jacobson, multicultural analyst, Mintel. “Watching a movie on TV or reading a book or magazine is taking a front seat to more financially-driven experiences, such as dining out or going to live sporting events.”

A little more than one third (36 percent) of Latino respondents to the Mintel survey indicated they watch a movie on TV more than three times per week. One third of respondents said they like to read a book or magazine in Spanish; 40 percent of Hispanics said they like eating out one to three times per month; 34 percent said they attend a sporting event, and 30 percent said they planed to attend a street festival in the next three months.

For Latinos going out dining and the movies were popular entertainment options. More than half (53 percent) of respondents said they had seen a feature film in a theater at least once in the last year and 42 percent said they planned to go to the movies in the following three months.

Mintel researchers concluded that movie theaters might benefit from targeting Latino movie goers with concession items that appeal to Hispanics or family discount programs since as a group Hispanics tend to have larger families than non-Hispanics.

Another form of in home entertainment was online surfing. Many (77 percent) survey respondents said they connect with friends on social networking sites such as Facebook or Myspace. More than one third (36 percent) of Hispanic adults who took the survey said they visit their social networking websites thrice a day or more often using mobile devices. More than half (65 percent) of Latino survey takers who spent time online said they have a smartphone, and 31 percent said they have an iPad or tablet.

Although language preference didn’t seem to impact the amount of money respondents said they spent on entertainment, the percent of monies available varied by gender. Hispanic women said they were spending 40 percent less on entertainment than Hispanic men, regardless of their household income. Volunteerism was not popular among survey respondents regardless of their income level.

Information about the report, Hispanics and Entertainment US June 2012, was released this month. The survey was conducted among 1,026 adults online and respondents had the option to take it in English or Spanish. The complete 124-page report costs $3,995.

One Response to Hispanics like movies, online activities, dining out