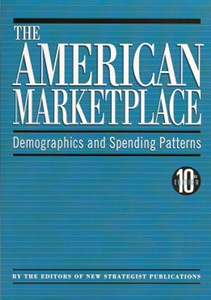 Television is the source of news for almost half of Americans, 22 percent of Americans rely on the internet for news and 18 percent of the population looks to print media for news, according to the 10 edition of The American Marketplace: Demographics and Spending Patterns (New Strategist, $89.95). The editors of the book used government sources to outline a population profile of the United States in one volume. The book’s main sources of information are: Census Bureau, Bureau of Labor Statistics, National Center for Education Statistics, National Center for Health Statistics, and Federal Reserve Board.

The 611-page softcover book published in 2011 features hundreds of tables in 11 chapters covering attitudes, education, health, housing, income, labor force, living arrangements, population, spending, time use, and wealth. Accompanying the tables is analysis on the meaning of the data and summary conclusions reached by the publisher’s staff. For example, at the beginning of the book it says that in recent years overall happiness (though not marital happiness) has declined and many people are distrustful of others.

People believe hard work leads to success although fewer people identify with the middle class, the publisher’s analysts concluded in the book. The Housing Trends section indicates most people live in single family homes and many people live near open space and woodlands. In the Income Trends analysis it says nationwide there is more income inequality, all racial and ethnic groups have lost ground, homeowners between 45 and 54 years of age have the highest incomes, while income peaks in middle age.

The book includes the latest attitudinal data from the 2010 General Social Survey and the chapter on time use examines data from the 2009 American Time Use Survey. There is new data on the changing housing market and demographic profiles of those who own or rent their home; and up-to-date income and labor force data and 2010 census data of the Asian, black, and Hispanic populations. The spending chapter examines how spending patterns may be changing. 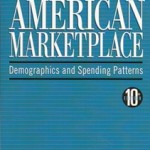