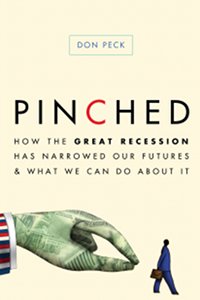 During the Great Recession of 2009 the economy shrank 4 percent, more than 8 million Americans became unemployed, home values dropped about 30 percent on average, the Dow was roughed up and 165 banks failed just to name some highlights.

Don Peck, features editor at The Atlantic, believes this most recent recession and the technological changes that preceded it will have a lasting impact on our country, specifically on the way we live, our work, and our family ties. Although some businesses and individuals are adapting overall Americans have been unable to adapt; this inflexibility has led to economic weakness and a social divide, according to the writer.

In Pinched How the Great Recession has narrowed our futures and what we can do about it (Crown Publishers, $22), a 223-page hardcover book published this year, he explains his theories and proposes solutions. He is optimistic in the country’s ability to overcome this historically difficult period thanks to its capacity for adaptability and reinvention, he says in the Introduction. 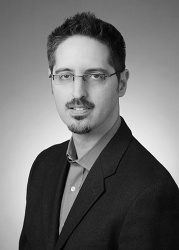 The writer, a resident of Washington, D.C. who covers the economy and American society, is of the opinion that there is a divide between rich non rich Americans that affects the views and impact of the wealthiest in society; that power urban areas are overcoming the worst of the recession while suburbs and other areas favored by the middle class are falling behind; that because many working class men have lost their jobs women are the new economic leaders of the household; and that the earning power of Millenials is decreasing, affecting that generation’s views and confidence.

“Amid the strains and fissiparous forces of a new, global era, can we still find ways to mix and balance liberty with justice, self-interest with cooperation?” he asks in the final chapter; and closes with the idea that to remain a united country Americans must find a way to do just that. 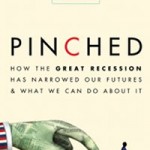