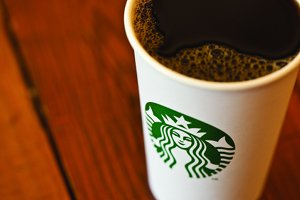 A cup of Starbucks coffee

Many coffee drinkers prefer to buy coffee from Starbucks, according to a November 15, 2011 poll among 1,170 voters. Hispanic respondents to the survey by Poll Position, were almost evenly divided between Starbucks (34.6 percent) and McDonald’s (34.7 percent); while 29.7 percent of whites and 27.6 of blacks preferred Starbucks. Among women 34.2 percent preferred Starbucks compared to 25.7 percent of men.

The question respondents answered was: “Among Caribou Coffee, Dunkin’ Donuts, McDonald’s, Seattle’s Best Coffee, Starbucks or some other place that sells coffee,  which is your favorite retail outlet for coffee?”

Starbucks was most popular among those aged 30 to 44 (37.9 percent) and 18 to 29 (35 percent) while respondents 65 and older (26.7 percent) preferred McDonald’s. There was little difference between political party affiliations: 30.9 percent of Independents, 30.8 percent of Democrats and 28.6 percent of Republicans demonstrating a preference for Starbucks.

2 Responses to Starbucks tops list of shops for coffee drinkers