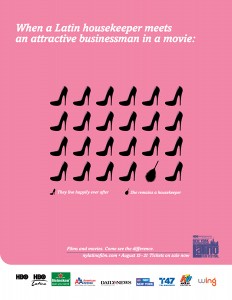 Hoping to attract English speaking New York City residents between 25 and 45 years of age to its twelfth annual event the organizers of the 2011 New York International Latino Film Festival (NYILFF) launched a new ad campaign the first week of August created to highlight a difference between movies and films by ribbing Hollywood movie cliches. The campaign with an estimated $50,000 in production costs and as much as one million dollars in paid and pro bono placements, was shot in Argentina with post production work in the United States. Scroll down to watch an ad.

The campaign emphasizes the shortage of Latinos in mainstream movies as well as the idea that Latino films concentrate on life compared to the “larger than life” abundant in blockbusters by showcasing stereotypical concepts like: The number of shots a six-round revolver can take in a movie without reloading, what happens in movies when a Latina housekeeper meets an attractive businessman, the names of gardeners in movies, and what happens in horror movies when a girl tries to get in a car.

TV and in-cinema ads, titled Asteroid, Dynamite, Fruit Stand Guy and Man in the Mirror, were produced by Wing, a New York ad agency, on a pro bono basis with the help of Academy Award winning Argentinean Production Company Puenzo Hermanos. The film festival staff believe the event’s audience consume a variety of media and love New York “for its energy and for everything it has to offer” and “define themselves as adventure-seekers and search out new and interesting experiences to fill their social calendar.” 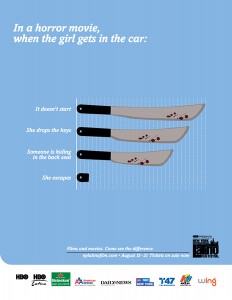 Each spot in the 2011 campaign makes fun of stereotypical Hollywood movie characters and ideas, and includes the tagline “Films and movies. Come see the difference.” In addition to TV, there are eight print and out-of-home ads in English and Spanish. The campaign seeks to reach “a broader audience with a commentary on the simplistic nature of Hollywood films, rather than an overtly Hispanic approach,” according to promotional materials.

Wing also created agency promotional material in-cinema and print that encourages people to let their Latino out. The in-cinema spot, intended to be “a whimsical and light-hearted effort” that shows an “un-Latin looking thin man” growing a thick mustache and liking it, attempts to emphasize the Hispanic influence on the mainstream market. Fifteen staff, led by Cionin Lorenzo, Elizabeth Gardner, Calixto Chinchilla, dedicated six months to the campaign production the success of which will be measured through ticket sales and on-line views. Festival staff anticipate 25,000 attendees at this year’s events.

The campaign was launched in NBC/Telemundo, HBO, Time, Out New York, Latina Magazine and the New York Daily News. In addition to the ads, the festival has active Facebook and Twitter pages where the new ads have been heavily promoted, a spokesperson indicated when asked about online placement of the ad campaign. The festival website was revised to coincide with the look and feel of the campaign. Also, the film festival independently created banner ads with geo-targeted placement on Hispanic websites. No information was available on which sites exactly.