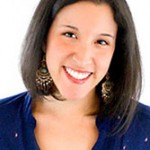 A podcast interview with Marcela Sarmiento, former assistant programming manager, Partnerships, AOL Latino is available in the Podcast Section of Hispanic Marketing & Public Relations, HispanicMPR.com. During the podcast, she discusses tuvozentuvida.com with Elena del Valle, host of the HispanicMPR.com podcast.

During Marcela’s three years at AOL Latino, she served as AOL Latino’s female empowerment site head coordinator. She oversaw tuvozentuvida.com. She also managed editorial and programming, and creative collaborations with the site’s sponsor.

Marcela has been instrumental in the creative development and oversight of Tecnopadres.com, a technology site for parents, and the recently launched Kraft’s Niños de Verdad Program. She was in the lead of AOL Latino’s Influential Contributor efforts. For two years Marcela also served as president of PorColombia, a network of students and young professionals of Colombian background in the United States and Canada.

To listen to the interview, scroll down until you see “Podcast” on the right hand side, then select “HMPR Marcela Sarmiento” click on the play button below or download the MP3 file to your iPod or MP3 player to listen on the go, in your car or at home. To download it, click on the arrow of the recording you wish to copy and save it to disk. The podcast will remain listed in the August 2011 section of the podcast archive.