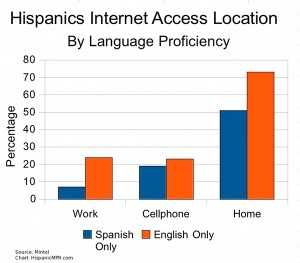 Hispanic Internet Use Location by Language – click to enlarge

In the same report Mintel indicated that members of blue collar Hispanic households that responded to the survey exhibited minimal internet usage. Many of the individuals in these households worked in positions that did not require use of a computer or access to the internet.

Acculturated Hispanics who live in a household where at least some English is spoken are more likely to surf the web than their less or least acculturated Spanish dominant counterparts, according to the Mintel findings. Most (95 percent) of adults in English only households use the internet compared to only just over half of adults in Spanish only homes.

Tags: hispanics use internet based on income language ability