The National Wildlife Federation(NWF) and Vme want Spanish speaking children to appreciate nature. In an effort to reach Hispanic preschoolers and their families the television network and the not for profit organization have teamed up to launch a TV series in Spanish scheduled to premiere today.

Animalitos Exploradores (Wild Animal Baby Explorers) will air daily at 8:45 a.m. during the Vme Niños block of programming for children that airs between 7:30 a.m. and 12:30 p.m. (ET) and the 24/7 cable channel Vme Kids. Eighty segments have been dubbed into Spanish from the original English language 15 minute episodes.

Based on NWF’s preschool magazine, Wild Animal Baby, the show is a combination of 3D animated characters and high-definition live-action footage. The program features five intrepid wildlife characters and an NSI (Natural Science Investigator) unit while they explore the natural world around them. According to promotional materials,  Animalitos Exploradores showcases young children and families engaging in simple and easily executable outdoor activities designed to teach them to appreciate nature.

“With Animalitos Exploradores, as in everything we do, NWF is committed to making learning fun for kids while instilling in them a lifelong respect for wildlife and the environment,” said Tony Summers, director, Production of NWF. 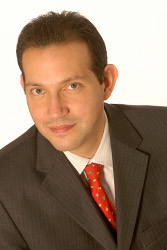 “Animalitos Exploradores fosters early nature exploration and helps preschoolers understand the world around them,” said Guillermo Sierra, senior vice president of programming at Vme. “By bringing Wild Animal Baby Explorers to Vme, we are able to expose young viewers to the beauties of the natural world and foster a respect for nature that lasts them a lifetime.”

The Animalitos Exploradores are Benita The Beaver, described as seeing beauty in all things, eager, warmhearted, and a tactile learner; Skip The Rabbit described as the group leader and a logical thinker; Izzy The Owl, described as plucky and curious; Sammy The Skunk, described as the youngest member of the group who loves to hide, is unabashedly silly and serves as the eyes, ears and attitude of the show’s young viewers; and Miss Sally The Salamander, described as the oldest in the group and the big sister who uses her knowledge and teaching skills to keep everyone on track.