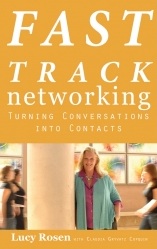 In the same way that geese traveling south for the winter benefit from increased flying range (and a safer journey than if traveling alone) by flying in a V-formation people who have a sense of community and like to network can help each other. That is how Lucy Rosen, founder and president of Women on the Fast Track, illustrates the advantages of networking. She recommends that people find others who share common interests in order to reach their goals more quickly and efficiently.

As part of her work in public relations and marketing Rosen, founder and president of SmartMarketing Solutions Group, has twenty five years of networking experience. In Fast Track Networking: Turning Conversations into Contacts (Career Press, $14.99), a book published earlier this year, she shares some of the knowledge she has gained from networking and promises readers “a unique step-by-step approach to networking proven to put people on the fast track.”

She wrote the 224-page softcover book, with Claudia Gryvatz Copquin, a journalist, with the goal of providing readers an insider’s look into what works in networking including “networking success stories” of business owners and entrepreneurs throughout the country.

“Networking isn’t giving your business card to everyone you meet, or collecting as many business cards as you can and then calling all the people the next morning and trying to sell them your widget. Yet unfortunately, that’s still how far too many people approach the concept of networking,” said Rosen in a press release. “When done right, networking can often be the differentiating factor that helps you land the deal, or in today’s times land the job, so it’s critical that people know how to approach networking in a way that not only builds relationships, but builds business. There’s an art to turning a run-of-the-mill conversation into a life-long contact, and the building of these valuable contacts is what this book is all about.”

The book is divided into thirteen chapters: Networking is Like Dating, Only Better; Get the Party Started; No Time for Awkwardness; Small Group, Big Results; If You Create It, They Will Come; Network…Naturally; Hunters, Gatherers, Networkers; Rein In Your “Deer in the Headlights” Approach; Not Working? Try Networking; Facebook and LinkedIn and Twitter, Oh My; From Filofax to Digital Filing Cabinet; A Promise Is a Promise. Keep Yours; and Putting the Strategic in Strategic Alliances. Each chapter ends with a summary of key points. 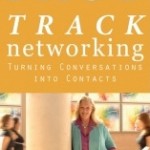