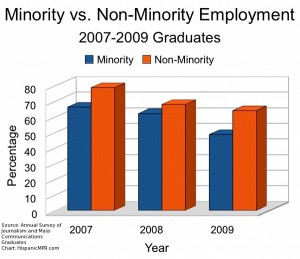 Declining media coverage due to fewer and smaller media outlets has affected marketing and media relations, particularly in the last few years. Further evidence of that is the decline, partly because of the recession, of employment opportunities for journalism and communications university graduates. This may have a medium and long term effect on others who deal with and rely on journalists and communicators to make their living.

In addition to the many challenges resulting from the changes in media formats and workforce reduction in recent years journalism graduates, especially those from ethnic and racial backgrounds, are encountering difficulties finding gainful employment in their area of study. A new report by the University of Georgia resulting from a survey of 2,700 journalism and mass communication students who graduated in 2009 revealed the lowest level of full-time employment in the 24-year history of the study.

Of the 2009 journalism and communication bachelor degree holders who responded to the survey only 55.5 percent were able to find full-time work within a year of graduating. That represents 4.9 percentage points decline from the year before. It is also significantly different from the 2007 figures when 70.2 percent of graduates found employment. Graduates receiving a masters degree also had trouble finding work; the employment rate dropped from 65.4 percent in 2008 to 61.9 percent in 2009.

Also, survey responses indicate an increase in the number of 2009 graduates working with the internet. More than half (58.2 percent) of 2009 bachelor graduates with communication jobs said their work involved Web writing and editing compared to 50.6 percent who said that the year before.

The Annual Survey of Journalism & Mass Communication Graduates is conducted each year in the James M. Cox Jr. Center for International Mass Communication Training and Research at the University of Georgia. This year’s report was written by Lee B. Becker, Ph.D. Tudor Vlad, Ph.D., Paris Desnoes and Devora Olin.