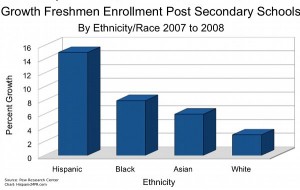 What are young people in America to do during this recession? Enroll in college. There is a college boom taking place and it is being driven by minorities, according to a recent Pew Research Center  article based on the organization’s analysis of new data from the United States Department of Education.

There was an increase of 144,000 freshman students from the fall of 2007 to the fall of 2008, the first year of the recession, at the nation’s 6,100 post-secondary institutions representing a 6 percent increase, the largest in 40 years. Almost three-quarters of the growth was from minority freshmen.

Of course the growth is not spread evenly across the country. Cities with historically large ethnic, especially Hispanic, populations may have markedly higher increases and an overall higher ethnic presence. An example is South Florida. 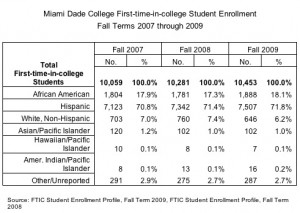 “MDC’s enrollment growth reflects the community we serve: more than 80 percent of Miami-Dade’s residents are racial or ethnic minorities, with Hispanics predominating. In the 2000 Census 57 percent of Miami-Dade County residents were Hispanic, increasing to 62 percent in the latest estimates. Hispanics at MDC have increased steadily as a proportion of overall student enrollment from 2007 through 2009, and even more so as a percentage of freshman enrollment,” said Margaret Mannchen, associate director, Institutional Research Operations, Miami Dade College, one of the largest post-secondary institutions in the country in both number of students enrolled (170,000) and number of associates degrees awarded

“Now Hispanics are about 72 percent of our first-time-in-college students. Looking at all credit students, we see both African American and White Non-Hispanic percentages declining slightly from Fall 2007 through Fall 2009. In 2009, however, the proportion of African American freshmen was starting to show an increase, after a slight decline in 2008.”

The growth is not surprising given the demographic profile of the United States. As the white population ages it is the minority youth that fuel the nation’s growth. In addition, Census Bureau surveys indicate the Hispanic high school completion rate reached an all-time high of 70 percent in October 2008, a 2.5 percent increase over 2007 and the largest increase of any ethnic or racial group.

Although in the past minority students tended to seek community colleges and trade schools, the growth from 2007 to 2008 was at all basic levels of post secondary education. At the same time, a lower percent of white freshmen enrolled in less-than-four-year schools in 2008 (53 percent) than in 2007 (55 percent); and in four-year schools in 2008 (62 percent) than in 2007 (64 percent).

Of course not all institutions of higher learning showed an increase for that time period. One private university in South Florida had a decrease in enrollment numbers.

“Unfortunately I don’t know that 2008 would be a good bench as nationally there was a decrease in overall enrollment due to the financial crisis and the availability of credit. The numbers picked up again sharply for 2009 and we are currently tracking for 2010 at about a 2-3% increase in enrollment. As I look at the applications coming in we are definitely seeing an increase in minority applications and matriculations,” said Andre Lightbourn, dean, Enrollment Management, Saint Thomas University in Broward County.

“According to our institutional fact book amongst the broad categories Black and Hispanic we are probably about flat for 2007, 2008 & 2009. The numbers have increased for foreigners and other ethnic groups. The number of white students has declined in the same period for the last three academic years 2007, 2008 & 2009.”

One Response to Freshmen enrollment increase driven by minorities