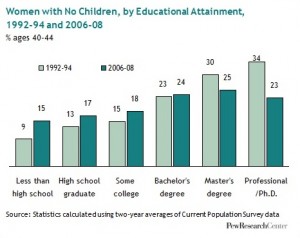 In the United States, white women are among all ethnic and racial groups the most likely not to have had a child over the past decade. Over that time period the gap between groups has narrowed with childless rates rising more rapidly for black, Hispanic and Asian women, than for white women. Not surprisingly, women who have never married are most likely to be childless. At the same time, those rates have declined over the past decade and the rate of childlessness has risen for married women and women who were married at one time, according to a recent report from the Pew Research Center.

In 2008, 20 percent or one in every five white women between 40 and 44 years of age was childless. That same year, 17 percent of black and Hispanic women and 16 percent of Asian women in that age group were also without children. Between 1994 and 2008, the rates of childlessness increased more for nonwhites than for whites: the childlessness rates for black women and for Hispanic women went up by more than 30 percent while the increase among white women was 11 percent. 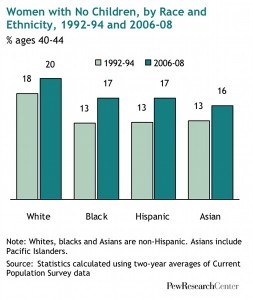 This is a sharp contrast to the rates in the 1970s when only 10 percent of white women reached the end of their childbearing years without ever becoming a mother. Although the most educated women are the most likely never to give birth to a child, the exception to the childlessness rates increase was among women with advanced university degrees where the rate fell in the past 10 years. In 2008, 24 percent of women ages 40 to 44 with a master’s, doctoral or professional degree had not had children, a decline from 31 percent in 1994.

The researchers believe childlessness increased for several reasons. Women today endure less social pressure to have children than in past decades. Improved contraceptive methods and better job options for women were also cited as influencing women’s decision to not have children. Women, especially educated women, have delayed marriage and having children, the researchers explain in the report.

Another factor is that some women do not give birth but raise adopted children. In 2008, there were 61.6 million biological children, 1.6 million adopted children and 2.5 million stepchildren in United States homes (2008 American Community Survey).

The report, Childlessness Up Among All Women; Down Among Women with Advanced Degrees, was written by Gretchen Livingston and D’Vera Cohn of the Pew Research Center and released June 25, 2010. They based their findings on Current Population Survey data. The Pew Research Center, a self described nonpartisan provider of information on “the issues, attitudes and trends shaping America and the world.”