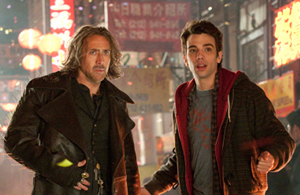 Last month, Walt Disney Pictures and Jerry Bruckheimer Films released Prince of Persia the Sands of Time (see Watch video – Bruckheimer, Disney release Middle Eastern themed adventure movie). They are at it again. On July 16, 2010 they will release yet another remake of The Sorcerer’s Apprentice. Directed by Jon Turteltaub the movie stars Nicolas Cage, Jay Baruchel, Alfred Molina, Teresa Palmer, Monica Bellucci and Toby Kebbell. The publicity staff released few details and made no advance copies available for screening. Scroll down to watch a trailer.

According to the Internet Movie Database, the movie was filmed in Brooklyn, New York City, and Bryant Park, Manhattan. Those with a long memory may recall the nine-minute segment by the same name in Fantasia, Disney’s well known animated eight part feature set to classical music and produced in the 1930s. The story itself was derived from Goethe’s poem Der Zauberlehrling. In it wizard Yen Sid’s lazy assistant tries to work magic to avoid chores. He gets into trouble because he does not know how to properly control the magic he sets into motion.

In 1980 there was a 22-minute Sorcerer’s Apprentice animated film narrated by Vincent Price. In 2002, there was another film by the same title starring Robert Dav and Kelly LeBrock. Cage and Bruckheimer have a history of working together. This is Cage’s seventh collaboration with the producer following The Rock, Con Air, Gone in 60 Seconds, National Treasure, National Treasure: Book of Secrets and G-Force. 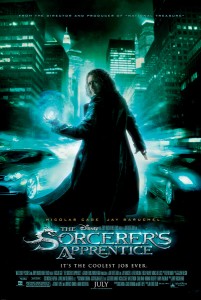 Official poster of the film – click on image to enlarge

In the movie, Dave (Jay Baruchel) appears to be an average college student until Balthazar Blake (Nicolas Cage), a sorcerer, recruits him as his reluctant assistant. This is followed swiftly by a crash course in magic. Of course it couldn’t be all fun and no danger. Dave has to battle the forces of darkness, in Manhattan, relying on courage he didn’t know he had to survive his training, save the city and get the girl.