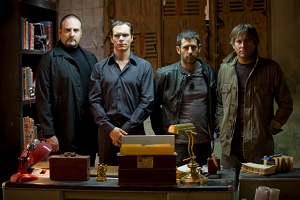 Sony Pictures Television (SPT) will premiere Los Simuladores, a Mexican series, in the United States on November 15 exclusively on Cinelatino, a Spanish-language movie channel. Based on an Argentine series of the same name, Los Simuladores centers on the adventures of four men operatives, trained and prepared to carry out sting operations. Scroll down to watch a preview of Los Simuladores in Spanish.

The team features Mario Santos (Tony Dalton), the brain, who comes up with the plans; Emilio Vargas (Arath de la Torre), the chameleon, who plays different characters in the operations; Pablo Lopez (Alejandro Calva), the go-to man, in charge of logistics and technical aspects; and Gabriel Medina (Ruben Zamora), the researcher, who finds the necessary information for Santos to come up with the plans.

“This is the highest-caliber premium series currently available to U.S. audiences in Spanish, and we’re excited to offer it exclusively to our viewers,” said Jim McNamara, chairman of Cinelatino. “The superb production values, excellent cast, and compelling story lines make this THE must-see series of the season.” 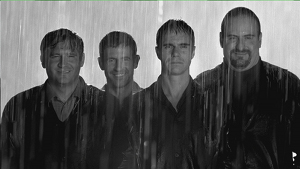 In late 2008, Los Simuladores debuted in Mexico on Televisa and throughout Latin America on Sony Entertainment Television. After a successful first season, a second season of the series began production earlier this year.

Los Simuladores is the second premium series to air on Cinelatino. The channel premiered the series Tiempo Final in the spring of 2009. The first two episodes of Los Simuladores are scheduled to premiere on Cinelatino on Sunday, November 15, at 7 p.m. EST and repeat at 11 p.m. EST (4 p.m. and 8 p.m. PT). A new episode of the 13 episode series will air every Sunday at 7 p.m. EST and will repeat at 11 p.m. EST (4 p.m. and 8 p.m. PT) during the season. Cinelatino plans to air Season Two in early 2010.

According to promotional materials, Cinelatino has more than 3.6 million subscribers on major cable, satellite and telephony providers throughout North America. Cinelatino offers Spanish-language programs and titles from Mexico, Latin America, Spain and the U.S. Cinelatino is jointly-owned by Grupo MVS, InterMedia Partners and Panamax Films.

Sony Pictures Television produces and distributes varied programming including series, telefilms, theatrical releases and family entertainment around the world and for every platform: broadcast and cable television, first-run and off-network syndication and digital distribution.