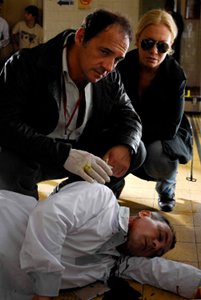 Julio Chavez, Cecilia Roth and a victim in Epitafios

When the second season of Epitafios, an HBO Latino and HBO2 suspense series in Spanish, began last month detectives Renzo Marquez (Julio Chávez) and Marina Segal (Cecilia Roth) were tracking another killer. This one replicates previous slayings as if they were works of art and photographs the crimes for posterity. Scroll down to watch a short video of Epitafios.

In 2005, a 13-episode season of Epitafios first aired on HBO Latino in the United States. In 2006, the series had its HBO Signature debut with English subtitles. The series is described as HBO Latin America’s first fictional dramatic series written and filmed in Latin America, by Latin Americans, and for the Latin American audience. A suspense story inside a love story, the Spanish-language series made its TV premiere on HBO Latin America in 2004.

Also filmed in Buenos Aires, the first season followed the cat-and-mouse game between a morose police detective (Julio Chávez) who was looking for a reason to live and a psychotic serial killer (Antonio Birabent) who was bent on revenge.