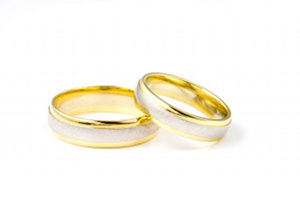 Over time just over half of the United States residents gets married. In the last decade the number of people who never wed dropped from a third to slightly more than a quarter. What, if any, impact does the recession have on lovebirds wishing to get hitched?

Most couples marry between the ages of 18 and 29 although they generally have not reached their peak salaries. Perhaps that is why it is common for parents to provide financial support for young couples’ wedding events and honeymoon travel. Looking at all newly married couples the average income is $55,000 according to wedding industry data gatherers. At the same time, the median wedding in past years cost $28,000. It seems likely some couples are spending much more than others, and also that the recession is denting the depth and breath of wedding plans for many of the five million people that will likely be seeking wedded bliss this year.

According to sellmoreweddings.com, the average wedding budget is $20,000 but the median cost is $28,000. Not surprisingly, couples marrying in major metropolitan areas such as Boston, Chicago or New York City pay more to say I do.

In the United States June is the most popular moth to marry, followed by August, September and October. In past years, there were 175 invited guests on average per wedding. Since only about half of couples rely on wedding planners we may be able to conclude that the remaining couples manage the event on their own or with the help of friends and relatives. When money is tight, like now, fewer couples take advantage of consultants.

According to sellmoreweddings.com, couples are waiting longer to get married so the engagement period may be longer. According to a recent Mintel focus group presentation and video, most of their focus group participants were making their own plans in an effort to save money and be creative; some were using consultants but only in a limited capacity. The findings are based on qualitative focus group research by Mintel, a supplier of consumer, media and market research, from April-May 2009.

“Seven out of 10 couples we talked to are planning their weddings with cautionary measures due to the economy,” said Kat Fay, senior analyst at Mintel. “However, despite revised plans and cutbacks, couples still feel certain their wedding days will be memorable without portraying a sense of being scaled down.”

Mintel researchers found couples are eager to economize by holding the gathering at a more modest place and with more affordable options than they would like. They emphasized savings on items like flowers, food and liquor, while seeking the best enjoyment and comfort of their guests. Some respondents also reduced the number of guests invited while still including close family and friends.

Although they consider honeymoons important they look closely at costs and ways of keeping them down by choosing nearer destinations that are affordable. While brides still place much value on their dress they seek affordable options and dresses on sale. They still allocate funds to beauty salon help with hair and makeup so the wedding pictures come out nice.

What about the ring? Rings are considered non negotiable by many focus group respondents. According to TheWeddingReport.com, in 2008, couples were expected to spend $6.1 billion on engagement rings in the United States. They were expected to shell out $2 billion more on wedding rings for brides and grooms. The same report indicates couples’ favorite month to become engaged is December, and Saturday is the most popular day to ask the question.

The result so far is an increase in informal and intimate events, even humor, among those willing to discuss their weddings. And, social networking sites were identified as a growing source of information for future brides.

While no ethnic specific information was gathered from the small Mintel study or cited by other online sources, it may be safe to conclude that emerging markets such as Latinos are well represented among wedding planners. Since those markets skew young and favor traditional family lifestyles they are likely to be overrepresented among those planning to wed.