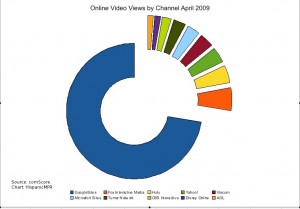 An epidemic is sweeping the country. No, not the flu. It’s videos. Online. Now that broadband Internet is widely available Americans seem to have fallen in love with videos. Although these are mostly short clips, 3.5 minutes on average, billions of videos were viewed around the country in the past months. In April 2009, for example, Americans viewed 16.8 billion videos online, including 6.8 billion videos viewed on Google. The average U.S. viewer watched 6.4 Hours video online that month, according to comScore Video Metrix. This represents a 16 percent increase compared to March 2009. ComScore analysts believe the increase was driven by a surge in viewing on YouTube.

YouTube.com accounted for more than 99 percent of all videos viewed at the property. Fox Interactive Media ranked second with 513 million videos (3.1 percent), followed by Hulu with 397 million (2.4 percent) and Yahoo! Sites with 355 million (2.1 percent).

A Virginia based company, comScore measures digital media usage. The company’s capabilities are based on a large international cross-section of 2 million Internet users who allow comScore to confidentially capture their browsing and transaction behavior, including online and offline purchasing.

One Response to Americans are viewing online videos in record numbers