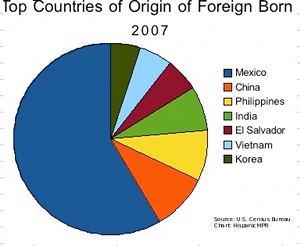 There were 38.1 million foreign born people living in the United States in 2007, according to the United States Census Bureau. The agency’s new analysis of data about the U.S. foreign-born population from the 2007 American Community Survey (ACS) released last week, indicates a higher percentage of people born in India have a bachelor’s degree or higher (74 percent) than people born in any other foreign country.

Egypt and Nigeria had rates above 60 percent. Somalis and Kenyans living in the United States are the most likely to be newcomers, and Somalis are among the youngest and poorest.

Mexico is the country with the highest birth list with more than 11.7 million people. The next highest countries by birth are China (1.9 million), the Philippines (1.7 million), India (1.5 million), El Salvador and Vietnam (both at 1.1 million), Korea (1 million) as well as Cuba, Canada and the Dominican Republic.

These figures come from new detailed characteristic profiles on people who were not U.S. citizens at birth available by country of birth and their location of residence at the time of the survey.

“These new ‘selected population profiles’ highlight the diversity among the many different foreign-born groups in the United States,” said Elizabeth Grieco, chief of the Census Bureau’s Immigration Statistics Staff. “This diversity is due in part to the way the various communities were established, whether it be through labor migration, family reunification or refugee flows.”

People from Mexico, Guatemala, Honduras and El Salvador age 5 and over are most likely to speak English less than “very well.” More than 70 percent of the foreign-born population from these countries identified themselves in that category.

The 2007 ACS estimates are based on a nationwide sample of about 250,000 addresses per month as well as 20,000 group quarters across the United States that were sampled, comprising approximately 200,000 residents. Geographic areas for which one-year data are available are based on total populations of 65,000 or more.

Federal officials rely in part on the data collected by the ACS to determine where to distribute more than $300 billion to state and local governments each year. Responses to the survey are confidential and protected by law.