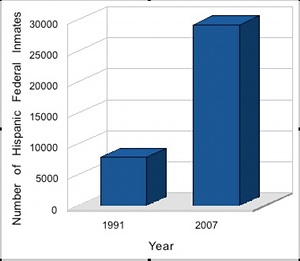 Number of Hispanic Federal Inmates – click on image to enlarge

An increase in illegal immigration over the years and the federal government’s recent enhanced surveillance of our borders have resulted in a significant increase in Latino inmates in federal prisons. Although Latinos only represent a fraction of the national population, they are overrepresented in federal prisons.

It’s noteworthy that 72 percent of Latinos in federal prisons are not U.S. citizens and most were jailed as a result of sentences in courts from one of the states bordering Mexico. It’s not surprising then that almost half, 48 percent, of Latino federal inmates were convicted of immigration related violations. The second most common cause of incarceration was drug convictions, according to a Pew Hispanic Center study released last week.

One Response to Latinos largest ethnic group in federal prisons