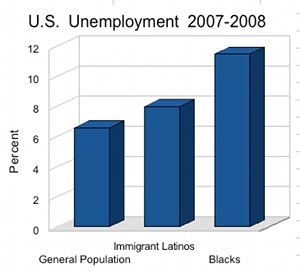 Although the economic recession is impacting everyone, it seems Latino immigrants, blacks and native-born Hispanics have been more severely affected than the rest of the population. While blacks are the only group with an unemployment rate in the double digits, 11.5 percent; in the fourth quarter of 2008, 9.5 percent of U.S.-born Hispanics were unemployed.

These are the conclusions of Rakesh Kochhar, associate director for Research, Pew Hispanic Center in an article published last week, Unemployment Rises Sharply Among Latino Immigrants in 2008. He relied on  data from the Current Population Survey, a monthly survey of 55,000 households conducted jointly by the Bureau of Labor Statistics and the Census Bureau.