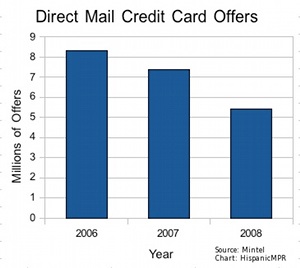 Does your mailbox look less full lately? One reason might be that the number of credit card offers has decreased significantly in the last year, especially for households with incomes below $100,000 a year. New data from Mintel Comperemedia, a leading market research company, indicates only 5.4 billion credit card direct mail offers were sent to Americans in 2008, the lowest annual total reported since 2000.

In 2008, most credit card issuers decreased their direct marketing mailings significantly, resulting in a new card mail volume decline of 26 percent compared with the previous year. Researchers estimate 2007 mail volume at 7.4 billion or 36 solicitations per household, and at 8.3 billion in 2006.

The decrease in offers may be the result of the weak economy as well as the hundreds of consumer complaints against credit card issuers. From poor performers to stellar credit holders, people across the country have been complaining for months about credit card company abuses including sudden rate hikes, changes in terms with little or no advance notification, as well as increasing late fees and minimum service charges.

According to the Consumer Federation of America, the average credit card debt per household is $7,430 and 35 percent of accounts are incurring late fees. There are those who argue that credit card companies are in trouble, having oversold their product. Unable to find a way to sell their debt to investors some credit card issuers are requesting federal rescue monies.

“With reduced funds available for lending and increased loan losses, credit card issuers had no choice but to drastically cut direct marketing for new cards during 2008. Credit card issuers shifted direct marketing strategy to focus on higher earning, lower risk consumers. 2008 was an adjustment year for the credit card industry as issuers were confronted with economic conditions not seen in decades,” said Stephen Clifford, vice president of Financial Services at Mintel Comperemedia. “In 2009, I expect less volatile fluctuations in mail volume as the industry positions itself to ride out the recession and recover.”

Although a breakdown by ethnic group was unavailable, it is noteworthy that while estimated direct mail volume for credit card acquisition fell across the board last year, individuals with the highest incomes saw little change in their mailboxes. According to Mintel Comperemedia, households with an income in excess of $100,000 a year received only 1 percent fewer credit card offers in 2008 than in 2007. At the same time, households making $50,000 or less saw a 42 percent drop in new credit card mail volume.

Based on that data, perhaps we can conclude that Latinos with incomes above $100,000 continued receiving an almost unchanged number of credit card offers while those with incomes below $50,000 saw a significantly lower number reach their mailboxes.