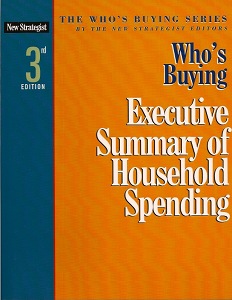 The source of the information is the Consumer Expenditure Survey of the Bureau of Labor Statistics, a national survey of household spending. There are indexed spending figures illustrating what households spend on many products and services, and whether the households expenditures in a segment are higher or lower than the average for all households in that segment and by how much. The indexed spending tables, based on the average figures, were produced by the publisher’s staff.