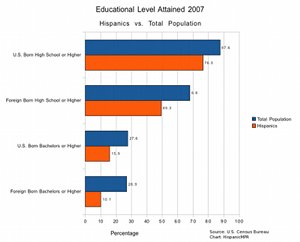 In the West, the percentage of foreign-born who had completed at least a bachelor’s degree or higher was less than the percentage of the native-born, 24 percent compared with 31 percent respectively. In the Northeast, both groups had 32 percent with bachelor’s degrees or more. The foreign-born in the South (26 percent) and Midwest (31 percent) were more likely than native-born residents to have at least a college degree (25 percent and 26 percent, respectively).

The report also indicates that: 84 percent of adults 25 and older had completed high school, while 27 percent had obtained at least a bachelor’s degree in 2007; a larger proportion of women (85 percent) than men (84 percent) had completed high school; a larger proportion of men had earned a bachelor’s degree (28 percent compared with 27 percent); the percentage of high school graduates was highest in the Midwest (87 percent), and the percentage of college graduates was highest in the Northeast (32 percent).

Also, men earned more than women at each level of educational attainment. The percentage of female-to-male earnings among year-round, full-time workers 25 and older was 77 percent; workers with a bachelor’s degree on average earned about $20,000 more a year ($46,805) than workers with a high school diploma ($26,894). Hispanic and black workers earned less at all levels than non-Hispanic whites and Asians.

The information in the report is from Educational Attainment in the United States: 2007, a report that describes the degree or level of school completed by adults 25 and older. This data stands out because it’s the first Census Bureau report on educational attainment to use data from the Current Population Survey and the American Community Survey. Researchers point out that combining the two data sets provides a state-by state comparison of educational attainment while providing an examination of historical trends.