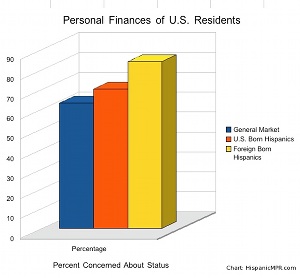 Personal Finances of U.S. Residents – click on image to enlarge

As a result of the economic recession, Latinos may be adjusting their habits and behaviors including spending less on dining out and holiday shopping, and helping family members or friends with a loan. About 3 percent of Latinos received a foreclosure notification in the last year and 10 percent of Latinos missed a mortgage payment or were unable to make a complete payment according to a recent survey of 1,540 Hispanic adults by the Pew Hispanic Center.

Sixty-two percent of respondent homeowners said there have been foreclosures in their neighborhood over the same time period; and just over one third of those survey (36 percent) said they worry about their own home going into foreclosure. The number of foreign-born Latino homeowners worried about losing their home to foreclosure was much higher, 53 percent.

At the same time survey respondents expressed greater concern about finances than the general population in the United States. Three quarters of U.S.-born Latinos surveyed and 84 percent of foreign-born Latinos, indicated their personal finances were in either fair or poor shape at the time of the survey, compared with 63 percent of the general U.S. population who expressed similar concerns.

The results of the survey were released in a report written by Mark Hugo Lopez, associate director, Gretchen Livingston, senior researcher, and  Rakesh Kochhar, associate director for Research, Pew Hispanic Center. The Pew Hispanic Center, a nonpartisan research organization, is dedicated to improving public understanding of the Hispanic population in the United States and to chronicle Latinos’ growing impact on the nation. It does not take positions on policy issues.