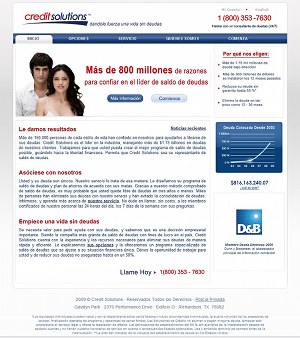 According to “A Snapshot of the Subprime Market” published in 2007 by the Center for Responsible Lending, 40 percent of subprime loans nationwide in 2006 were issued to Latino households. At the same time, information from September 2008 from the National Association of Hispanic Real Estate Professionals, “A Warm Welcome: Despite barriers, Hispanic home ownership may be the fix for national housing crisis Carolina del Norte,” indicates that by 2012 40 percent of first-time home buyers nationwide may be Hispanic.

Keeping this in mind Credit Solutions, a Texas debt management company, recently launched a Spanish language version of its website to reach Spanish speaking Latinos in the United States. Except for the text of the sample Settlement Letters and the Success Stories audio all the content on the main website was adapted for the Spanish language pages.

“It goes back to the original reason I founded Credit Solutions: to give families suffering real hardships, like job loss, medical bills, or a death in the family, an alternative to bankruptcy and a chance to have someone on their side, working for them. Lots of people don’t realize that most credit counseling agencies actually represent the creditors. We represent the consumer and act a mediator between our clients and their creditors,” said Doug Van Arsdale, chief executive officer, Credit Solutions in response to the question of why the company decided to target Latinos at this time.

Executives at Dallas-based Credit Solutions believe Hispanic families have been particularly hard-hit by the economic situation and a disproportionate number is struggling against foreclosure. This may not come as a surprise to lending industry professionals.

According to the 2006 Hispanic Homeowner Seminar at the U.S. Department of Housing and Urban Development, non-white Hispanic Americans were 39 percent less likely to own a home at that time. Seminar representatives concluded that Latino homeowners maintain higher total amounts of debt and are more likely to be victims of predatory lending practices.

Often lenders justify higher mortgage rates for minorities claiming the individuals from these cultural groups have shaky credit histories, making lending to them riskier than to mainstream borrowers. However, in 2006, representatives of the Center for Responsible Lending examined 50,000 subprime loans (described as the “most extensive study of its kind”) and determined African-Americans and Latinos were almost a third more likely to end up with a high-priced loan than non Hispanic white borrowers with comparable credit credentials.

According to Credit Solutions promotional materials, its Spanish-language site offers advice, tips and tools designed to empower clients to achieve a debt-free lifestyle. There is an overview of why company representatives believe debt settlement is preferable to a debt consolidation loan, credit counseling or declaring bankruptcy. There are also videos of client testimonials; and settlement letters from lending sources detailing instances of settled accounts, and the actual savings in each case.

“Since I am not familiar with these complaints, I have referred them to our Executive Review Team so that they are addressed immediately and resolved. We have 90,000 active clients, and we are 100 percent committed to customer satisfaction. If, for any reason, these complaints have not yet been addressed, they soon will be resolved to the best of our ability,” a Credit Solutions representative said by email when invited to respond to the issue.