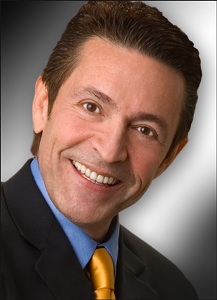 The program is one of several under the heading of Radio on TV that Mega TV offers in both media formats. Other programs that air in both formats include “El Vacilón de New York” and “El circo de Puerto Rico.” “El Chulo de la Mañana” is hosted by Joaquin Garza, also known as “El Chulo.” On the show, Garza is assisted by Zacatecas, Mexico born Raul Bernal who is known on the air as “Doña Mela,” and Denise Garcia. “Doña Mela” is meant to resemble a typical Mexican grandmother with an old fashioned and conservative point of view. “She” often disagrees and argues with El Chulo. “Doña Mela” also disagrees with Garcia’s modern views on life.

Garza’s radio career spans 23 years. He has worked in radio in Los Angeles, San Jose, San Francisco, and Sacramento, California and Dallas and Austin, Texas. Garcia, born in Tamaulipas, Mexico, came to the United Stats when she was 15. She grew up in Alamo, Texas and graduated college with a bachelor’s degree in education.

“’El Chulo de la Mañana’ in Los Angeles will give Mega TV audiences a very funny, interactive morning show that covers topics that are part of everyday life: Work, family, relationships, infidelity, entertainment and community issues,” said Cynthia Hudson Fernandez, chief creative officer and executive vice president for Mega TV. “Garza’s show has been a great success in numerous radio markets, and we are confident that our TV audience will love ‘El Chulo de la Mañana‘ and connect with Garza’s unique style. ‘El Chulo de la Mañana’ is formatted to attract both local and national audiences, and has enjoyed tremendous acceptance, especially with the Mexican audience, which constitutes the largest segment of the U.S. Hispanic population.”

Born in Zapotlan El Grande, Jalisco, Mexico, Garza’s career began in 1985 at radio station KALI in Los Angeles, California. In 1992, he worked for Spanish Broadcast System at FM 98. By 1995, he was the lead in the show “El Chulo Y La Bola” at Z Spanish Network based in San Jose, California and his popularity continues.

One Response to MegaTV debuts radio show on TV