Watch video – Snapple reaches out to youth with music video 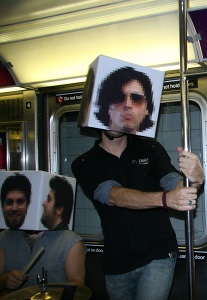 A scene from the Cat’s Meow music video

Last year Snapple released an Antioxidant Water “Bubble Wrap” commercial targeting  young, indie rock music fans, students, men and women, including Latinos, based in major markets with a strong focus in the south, especially Florida. It was so popular that the company decided to follow up with a music video performed by the same indie rock band, The Bad Eliots, that recorded the commercial. Since the release of the band’s first music video, Cat’s Meow, late last year, the video has been featured in more than 50 websites. The song is available for free download and online purchase. Scroll down to watch the Cat’s Meow video.

The Bad Eliots is a group of four New York City based musicians. Roto (also known as James Rotondi), singer and multi-instrumentalist. He has performed with the French band Air, Mike Patton’s Mr. Bungle and The Grassy Knoll, a jazz-hop band; and Ant Cee (also known as Anthony Citrinite), the band’s drummer. He was a founding member of The Smash-Up, who performed from 2004 to 2007 on Megadeth’s Gigantour, the Deftones’ Taste of Chaos tour, and the Warped Tour, from which Ant’s drum sticks were plucked to be placed on display in Cleveland’s Rock and Roll Hall of Fame.

Matias, the band’s bassist, is a producer and multi-instrumentalist who runs a studio in New Jersey. He is also a singer and guitarist with The Crash Moderns, as well as producer and engineer for the New York City Power Pop band. Riario is the maestro behind The Monster, a  New York metropolitan area live cover band.

Snapple is owned by the Dr Pepper Snapple Group, one of the largest beverage companies in the Americas. The company  makes and distributes more than 50 brands of carbonated soft drinks, juices, ready to drink teas, and mixers across the United States, Canada, Mexico and the Caribbean including Dr Pepper, Snapple, 7UP, Mott’s, A&W, Sunkist Soda, Canada Dry, Hawaiian Punch, Schweppes, Peñafiel, Squirt, Clamato, Mr & Mrs T Mixers, Rose’s, and Yoo-hoo.