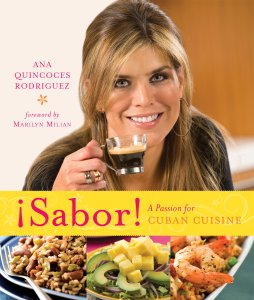 Would you like to try something a little different at dinner for the holidays? Do you like Latin food that’s tasty but not red hot? Perhaps Cuban food is just what you need.

In Sabor! A Passion for Cuban Cuisine (Running Press, November 2008,
$29.95), Ana Quincoces Rodriguez, a Miami, Florida resident and amateur cook, offers a look at the food and flavors of Cuba. She starts out outlining what she describes as the “holy trinity” of Cuban cuisine, garlic, bell pepper, and Spanish onion.

She titled the book Sabor,  Spanish for flavor, because for her it describes the many aspects of cooking, saying that it’s possible to cook with sabor, speak with sabor, and dance with sabor; and that in “Cuba, sabor is both a state of mind and a way of life.”

The 240-page hardcover book has 130 recipes, many accompanied by full page color photos. Although the chapter titles are in Spanish and English, the rest of the content, including the list of ingredients, is in English. It is divided into: Some Basics, Appetizers and Snacks, Soups and Sandwiches, Sides and Salads, Main Dishes, Desserts and Drinks. At the end, there are Sample Menus, Glossary, Sources Guide and Conversion Tables.

Rodriguez, who grew up in Miami, learned to cook at her Cuban mother’s side. She has been mentioned in several magazines and newspapers and on national television after self-publishing her first book, Cuban Chicks Can Cook. She lives in Miami, with her husband and two teenage daughters.

Click here to buy Sabor!: A Passion for Cuban Cuisine