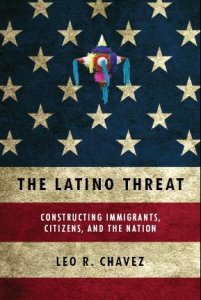 In his latest book, The Latino Threat Constructing Immigrants, Citizens and the Nation, Leo R. Chavez examines the coverage of recent immigrants with the desire to illustrate how prejudices have been the basis to wrong a segment of the population and outline the meaning of American.

The 256-page paperback book is divided into seven chapters and two parts: Constructing and Challenging Myths; and Media Spectacles and the Production of Neoliberal Citizen Subjects.

Chavez argues that immigrant groups have often been seen as threats by the residents of the country when they first arrive. He mentions the German language threat, the Catholic threat, the Chinese and Japanese threats. At the same time, he says that Latinos have been a part of the United States since the late sixteenth and early seventeenth centuries; and that they had a presence in the territory even before the English colonies were established.

He also sets out to examine immigration related issues, the concept of citizenship as well the definition of American and how the media portray them. He concludes that citizenship is about more than legal rights and definitions and includes an individual’s participation in society.

Chavez is professor of Anthropology at the University of California, Irvine. Prior to this book, he wrote, in 1998, Shadowed Lives: Undocumented Immigrants in American Society; and in 2001, Covering Immigration: Popular Images and the Politics of the Nation.