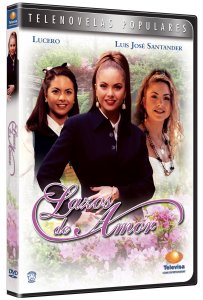 Earlier this year, Xenon Pictures and Lionsgate Entertainment released on DVD Lazos de Amor, a telenovela (Spanish language soap opera style program) which at the height of its popularity had five million nightly fans. The single-disc DVD with more than 304 minutes of content is in Spanish with English subtitles and sells for a suggested retail price of $19.98.

Winner of the 1996 TVyNovelas Award for Novela of the Year the program aired on television in 1995, capturing a consistent 24 rating on the U.S. Nielsen Rating scale. Some fans believe the serialized program’s success was due in part to its star, Lucero, who earned the TVyNovelas Award for Best Actress for her performance as identical triplets with disparate personalities.

Lazos de Amor (Spanish for Love Ties) is the story of Maria Paula, Maria Fernanda and Maria Guadalupe, identical triplets who look alike but have very different personalities. When the girls were very young, their parents were killed in a terrible auto accident caused by Maria Paula who covered her father’s eyes while he was driving. The accent left Maria Fernanda blind and Maria Guadalupe with amnesia.

Maria Guadalupe was rescued by a woman who raised her as her own daughter, while the others were raised by their grandmother Doña Mercedes, who never lost hope of finding her lost granddaughter. Maria Fernanda grows up to be a sweet and generous girl; Maria Paula becomes willful, capricious and egotistical, always needing to be the center of attention. The story climaxes with the inevitable encounter of the three sisters, which will have serious consequences in their lives and in the lives of those close to them.