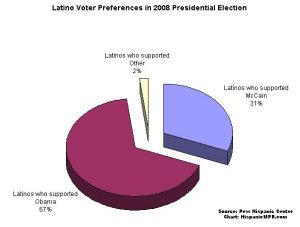 Latino Voter Preferences in 2008 election – click on chart to enlarge

According to exit polls of Latinos in nine states, Hispanics in the November 4, 2008 election voted more than two to one in favor of Democrats Barack Obama and Joe Biden over Republicans John McCain and Sarah Palin. In at least one state this voting pattern represented a reversal from the last election when many Latinos voted for the Republican candidate.

Across the country Latinos voted for Obama in significant numbers. A slightly higher percentage of Hispanic women voters (68 percent) than Hispanic men voters (64 percent) favored Obama. Young Hispanics voted like most of the youth in the country. Seventy-six percent of young Latinos supported the Democratic presidential candidate compared with only 19 percent who voted for the Republican presidential candidate.

In states with large Latino populations Obama was the victor by large margins. The most notable of these was Florida. In past elections many of Florida’s Latinos voted Republican. For example, in 2004, 56 percent of Latino voters supported President Bush. This year, 57 percent of Florida Latinos voted for Obama.

In other states with large Latino populations the margin favoring the Democratic candidates was more pronounced. In New Jersey, Obama carried 78 percent of the Latino vote; in Nevada, 76 percent, and in California, 74 percent.The findings are based on analysis by the Pew Hispanic Center of exit polls from Edison Media Research published by CNN.

The Center’s researchers estimate there was a 1 percent increase in Latino voters compared to the last elections; 9 percent of the voters in the 2008 election were Latino compared to 8 percent in 2004.