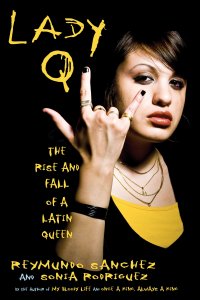 Lady Q: The rise and fall of a Latin queen book cover

Sonia was born to a poor and uneducated mother in Puerto Rico in 1967. That already promised her a life of economic hardship. Her mother also neglected her and allowed the men in her life to abuse Sonia physically and sexually starting at the age of five. When Sonia had the courage to tell her mother, she disbelieved her and heaped physical and verbal abuse on her. This childhood of neglect and suffering eventually led Sonia, a shy and love starved young girl, to seek solace in gang life in the city where she spent her growing years, Chicago.

In Lady Q: The rise and fall of a Latin queen (Chicago Review Press, $24.95), Reymundo Sanchez, a former gang member, and Sonia Rodriguez, a former Queen of Kings gang member, share the tale of Sonia’s life among the Almighty Latin King and Queens Nation, one of Chicago’s most prominent gangs in a 269-page hard cover book published earlier this year.

The book is divided into 16 chapters beginning with her early childhood years in Puerto Rico and her move to Chicago with her abusive step father Juan and her family; and ending with her life today and her efforts to find herself outside the gang that she once belonged to and that shaped her life in so many ways.

According to promotional materials, Lady Q is the first Latin Queen to go public with her story, sharing a woman’s perspective of gang life. The book was born after Sanchez invited Sonia to describe her life story and her experience in the gang known for its violent tendencies and criminal activities.

Reymundo Sanchez is the pseudonym of a former Latin Kings gang member. He is the author of My Bloody Life and Once a King, Always a King. Sonia Rodriguez is also a pseudonym.

Lady Q: The Rise and Fall of a Latin Queen

My Bloody Life: The Making of a Latin King

Once a King, Always a King: The Unmaking of a Latin King