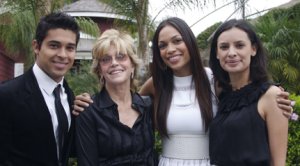 A scene from the Voto Latino telenovela

Since January 2008, Voto Latino has reached out to millions of Latinos and registered more than 26,000 new voters in key Battleground States. Leaders at the non-partisan organization hope to double Voto Latino’s initial voter registration goals. 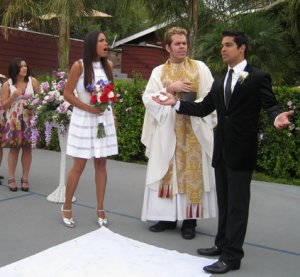 Additional Voto Latino initiatives include grassroots efforts in partnership with national media outlets to prompt Latino voter awareness and registration. Voto Latino recently won the Myspace Impact Award for Community Organizing, carrying over 70 percent of the online vote. Voto Latino received a grant from Myspace that will go toward Voto Latino’s get out the vote efforts.

Latino Vote produced a television special hosted by Rosario Dawson and Fat Joe, in conjunction with MTV Tr3s about the presidential candidates and issues that matter to Latino youth. Latino Vote also produced “Decisión 2008,” a television special in conjunction with LATV. Shot in front of a live studio audience, the debate on the presidential election is moderated by the network’s Humberto Guida and includes Maria Teresa Petersen, executive director, Voto Latino; Malverde, a political activist and hip-hop artist; and Carlos Arias, a Latino producer.

The non profit organization launched a voter initiative with Youtube and PBS, Video Your Vote, to distribute 100 digital video cameras to Latino voters to document their experience at the polls on Election Day. The participants will upload their footage to a dedicated Youtube channel accessible to the general public at youtube.com/videoyourvote <http://www.youtube.com/videoyourvote>

As part of the ongoing aggressive Get Out the Vote (GOTV) effort in Colorado, Voto Latino will host a GoTV Bash in Denver on October 30. The event will feature members of an artist coalition who leverage their celebrity to promote civic engagement. Voto Latino organizers plan to reach out to 500,000 voters Colorado to invite them to vote.

Voto Latino is developing public service announcements in Spanish with record label Fonovisa/Disa about the importance of voting and civic engagement targeted at the Midwest and Western states. The partnership may mark one of the first times voter registration PSA’s are being targeted to new citizens originally from Mexico. Participating artists include Jenni Rivera, El Chapo de Sinaloa, La Arolladora Banda Limon, Yolanda Perez and El Gringo.

Founded in 2004, Voto Latino is a non-partisan, nonprofit voter engagement organization that works to promote an enfranchised America by leveraging celebrity voices, multi-media platforms, and youth themselves to promote positive change. Voto Latino’s mission is to engage a new generation of Americans in civic participation.