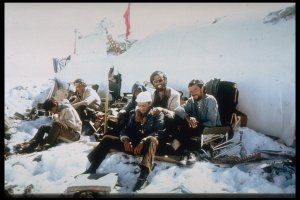 On October 13, 1972 after boarding a flight for a match in Chile a team of students from Montevideo, Uruguay disappeared. Two days before Christmas, 16 of the 45 passengers resurfaced having survived 72 days after their plane crashed on a remote Andean glacier. Stranded: I’ve come from a plane that crashed on the mountains, a documentary about their story, opened in theaters October 22, 2008.

Following the crash, the governments of Argentina, Chile, and Uruguay searched the area for the survivors without success. Seventy days after the plane crashed, a Chilean shepherd in the foothills of the Andes, caught sight of two men on the other side of a torrential river. Gesticulating frantically, they fell to their knees, their arms wide open. The shepherd took them for tourists and left.

The next day, he returned to the same spot and noticed that the men were still there. The sound of the water was so loud on the banks of the river that it was impossible for the three men to hear each other so the shepherd threw a piece of paper and a pen, wrapped in a handkerchief, over the river. The two bearded men in rags wrote something on the paper and threw it back to the shepherd: “We’re from a plane that crashed on the mountains. Fourteen of our friends are still alive up there.” 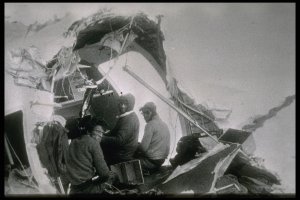 Following their rescue, the survivors admitted they had eaten human flesh to survive: “… the day came when we had nothing left to eat, and we said that Christ, by offering his flesh and blood during the Last Supper, had shown us the way by indicating that we had to do likewise: take his flesh and blood, incarnated in our friends who had died in the crash… It was a personal communion for each one of us… It’s what helped us to survive…”

The story was first documented in the 1973 bestseller Alive and the 1993 Ethan Hawke movie by the same name. The recently released documentary was made by Gonzalo Arijon, a childhood friend of some of the survivors, and was produced by Marc Silvera and 16 of the survivors.

“Several of these survivors are friends of mine. We shared the same carefree teenage years. I was shocked by their disappearance and dumbfounded when they came back to life. I shared whole nights with them, listening to their stories which constantly revolved around their survival up there. Their tragic – but also amazing! – epic continued to haunt them, day after day, year after year. And it’s still the case today,” said Arijon.

“Despite a best-seller (Alive! The Story of the Andes Survivors by Piers Paul Read, five million copies sold in English alone), and despite a Hollywood movie (Alive by Frank Marshall, a 1993 Disney-Paramount co-production), we still have the feeling that this story has never been told from the inside, that what they have to say has never really been heard. And there is always this growing feeling among them that they have something to tell us, to transmit to us, that is way beyond an ‘enormous anecdote’…

Thirty years after the event, I suggested making a film about it. A film that tells of the creation of a new society, cut off from the rest of the world, requiring the reinvention of codes and rules. No leaders—in the traditional sense of the term—but rather a collection of personalities that are gradually revealed, which harmoniously head towards a common objective: to get out of this hell together, and return to the land of the living together. An exemplary story about exceeding oneself, getting to know one another, that deals with the importance of friendship and solidarity in extreme situations.” 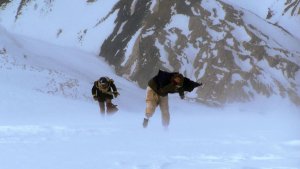 A scene from the film Stranded

Arijon relied on on-location interviews, archival footage and reenactments to share the story, told by the survivors themselves, with the audience. Thirty-five years after the crash, the survivors returned to the crash site which they named the Valley of Tears, where they shared their harrowing story on film.

“At the time when the group was having trouble making the decision, I remember saying: ‘If I were dead, there, in the snow, and you were debating whether or not to use my body in an attempt to survive… If, while being dead, I had the possibility of getting up, I would kick your asses, you bunch of idiots! ’ They all listened to me in silence, and I think that these words helped the group to take the step,” said Gustavo Zerbino, one of the survivors.

“When Roberto cut the first thin strips of meat, he placed them on the cabin. I went to eat hastily, in secret… I felt ashamed the whole time I was up there. I wanted to hide that. For a long time, I was obsessed by this story of human meat… But I couldn’t admit it…,” said Adolfo “Fito” Strauch, another survivor.

The film is 126 minutes long in color and black and white in Spanish with English subtitles. Stranded received awards at festivals around the world including the 2007 Sundance Film Festival.

Arijon, born in Uruguay in 1956 has lived in France since 1979. Over the past 15 years, he has directed several documentaries, including Lula’s Brazil: Managing a Dream; Far Very Far from Rome; The Dark Side of Milosevic; Rio de Janeiro–A Vertical War; and For These Eyes.